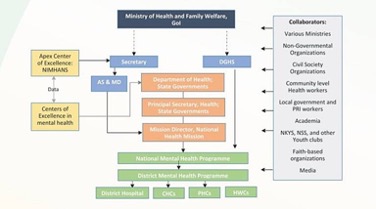 Kyzyl Why in news?

Springboro  The Ministry of Health and Family Welfare unveiled the National Suicide Prevention Strategy  the first-of-its-kind policy formulated by the government to prevent suicides as a public health priority.

Who are the Stakeholders?

The implementation has five key stakeholders responsible for realising the objectives.

What are the Ongoing suicide prevention initiatives in India?